Without effective biofoulant control, a seawater treatment system can become contaminated with macroorganisms, such as mussels and barnacles, and microorganisms, such as bacteria. These organisms can cause corrosion, restrict flow, irreversibly foul equipment, and cause additional operational issues.

With more than 25 years of proven reliability, in excess of 160 units operating worldwide in a wide variety of applications, no moving parts, and no requirement for a hydrogen disengagement system, the BFCC system is smaller and less expensive than other units available on the market—even in comparison with conventional sodium hypochlorite generators—and requires much less power and maintenance.

The BFCC system uses DC electrolysis to produce copper and chlorine at low concentrations. Typically, the dosing levels of copper and chlorine are 5 ppb and 50 ppb, respectively, which is considerably less than a chlorine-only system. The low concentrations have a significantly lower environmental impact. The system is contained in a small equipment package and there is no requirement for hydrogen disengagement because the quantity of hydrogen produced is extremely small and it is diluted in the flow of water passing through the package. 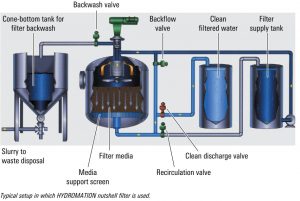