The Eclipse Model 700 Transmitter is a loop-powered, 24 VDC level transmitter that is based upon the proven and accepted technology of Guided Wave Radar (GWR).Encompassing a number of significant engineering accomplishments, this leading edge level transmitter is designed to provide measurement performance well beyond that of many of the more traditional technologies.

This single transmitter can be used in a wide variety of applications ranging from very light hydrocarbons to water-based media. One universal Model 700 transmitter can be used and interchanged with several different probe types and offers enhanced reliability as it is certified for use in critical SIL 2/3 hardware safety loops.The ECLIPSE Model 700 supports both the FDT/DTM and Enhanced DD (EDDL) standards, which allow viewing of valuable configuration and diagnostic information such as the echo curve in tools such as PACTware ™, AMS Device Manager, and various HART® Field Communicators.

ECLIPSE Guided Wave Radar is based upon the technology of TDR (Time Domain Reflectometry). TDR utilizes pulses of electromagnetic energy transmitted down a wave guide(probe). When a pulse reaches a surface that has a higher dielectric constant than the air (εr = 1) in which it is traveling, a portion of the pulse is reflected. The transit time of the pulse is then measured via high speed timing circuitry that provides an accurate measure of the liquid
(or solids) level. The amplitude of the reflection depends on the dielectric constant of the product. The higher thedielectric constant, the larger is the reflection. 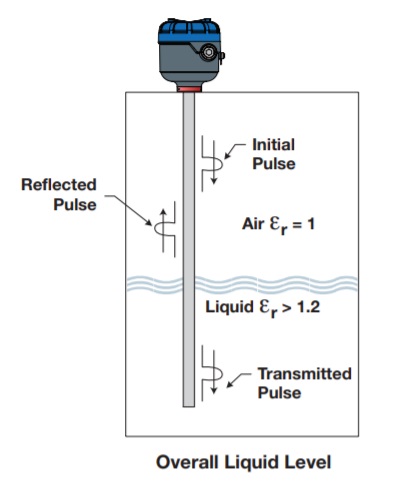 The ECLIPSE Model 700 is capable of measuring both an upper liquid level and an interface liquid level. As only a portion of the pulse is reflected from a low dielectric upper surface, some of the transmitted energy continues down the GWR probe through the upper liquid. The remaining initial pulse is again reflected when it reaches the higher dielectric lower liquid. It is required that the upper liquid has a dielectric constant less than 10, and the lower liquid
has a dielectric constant greater than 15. A typical interface application would be oil over water, with the upper layer of oil being non-conductive (εr ≈ 2.0), and the lower layer of water being very conductive (εr ≈ 80). The thickness of the upper layer could be as small as 2″ (50 mm) while the maximum upper layer is limited to the length of the GWR probe. 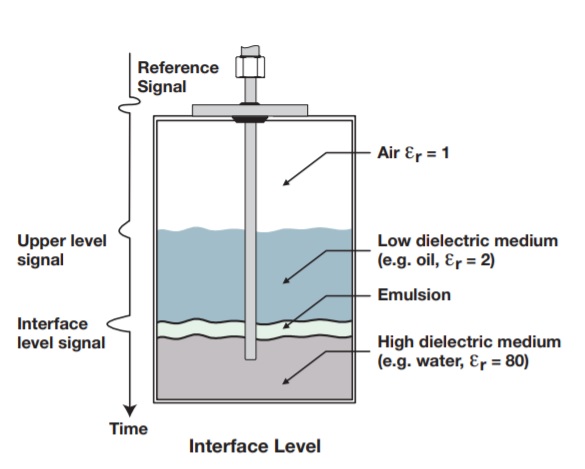 VESSELS : Most process or storage vessels up to rated probe temperature and pressure. 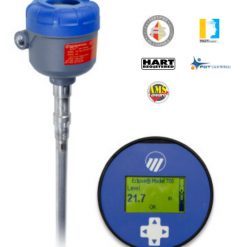 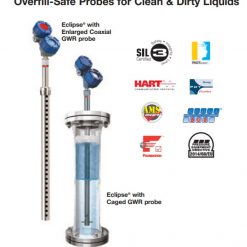 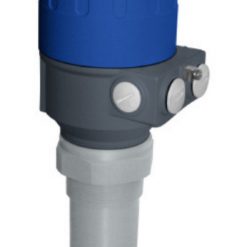