Designed as an alternative and upgrade to traditional gauge devices, Magnetic Level Indicators (MLI) from Orion Instruments® are manufactured to provide accurate and reliable liquid level in a wide range of applications. Our MLI product line—manufactured globally at multiple facilities— requires minimum maintenance and eliminates common sight glass problems like vapor and liquid emission. Orion Instruments specializes in precision-engineered excellence and offers highly customized configurations and options for process environments, including those with extreme temperatures and pressures.

True Redundancy in a Single Chamber of Magnetic level indicator Aurora® .The Aurora® MLI combines Eclipse® Guided Wave Radar (GWR) and a float-actuated visual indicator to simultaneously provide both continuous and local level indication. So unique is the Orion Instruments ® dual redundancy within a singlechambered MLI that Aurora® has been granted a U.S. patent.

The GWR probe area is separated from the freemoving float by a baffle plate.

The custom float located inside the chamber is magnetically coupled to the visual indicator. The float rotates flags or moves a shuttle to visually indicate
liquid tank level (as explained in more detail at right).

The float positioned within the Aurora® chamber risesand falls according to levelchanges. The float contains an internal group of magnetsthat are “coupled” with magnets in the flags of the visual indicator. As the float moves, the flags rotate to expose the color of theiropposite side. The position where the flag’s color changes corresponds to a point on the measuring scale indicating true level. (The optional shuttle indicator moves parallel with the float to indicate level on the scale). 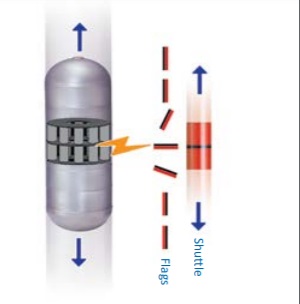 Orion Instruments® floats are engineered to provide the world’s best MLI performance.The 360-degree vertical placement of the magnets assures proper
coupling with the flag or shuttle of the indicator, even if the float is spinning in its chamber. The magnetic assembly creates a constant Gauss rating optimized to ensure reliable performance. Float magnets are designed to function at temperatures up to +537° C (+1000° F) for years of reliable service.Special float alloys are available.

The superb float performance within the Aurora® is due in part to an angled baffle plate mounted inside the chamber.The baffle plate ➀ partitions the GWR probe area ➁ from the float area ➂ and serves as a guide to ensure both smooth float travel and proper indicator operation. Perforations along the baffleplate equalize pressure and allow free media flow within the chamber. The probe area ➁ also acts as a gasbypass zone when flashing occurs. This helps in preventing damage to the float. 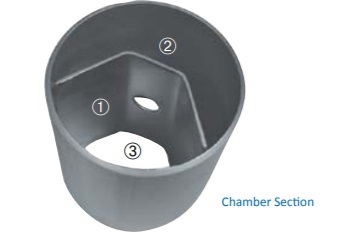 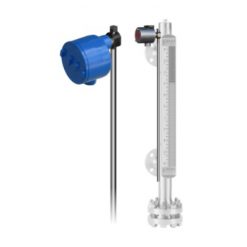 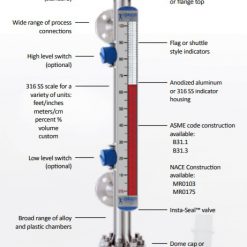 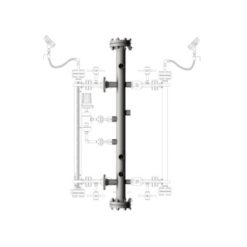